Poffo history at your fingertips with video, pictures descriptions 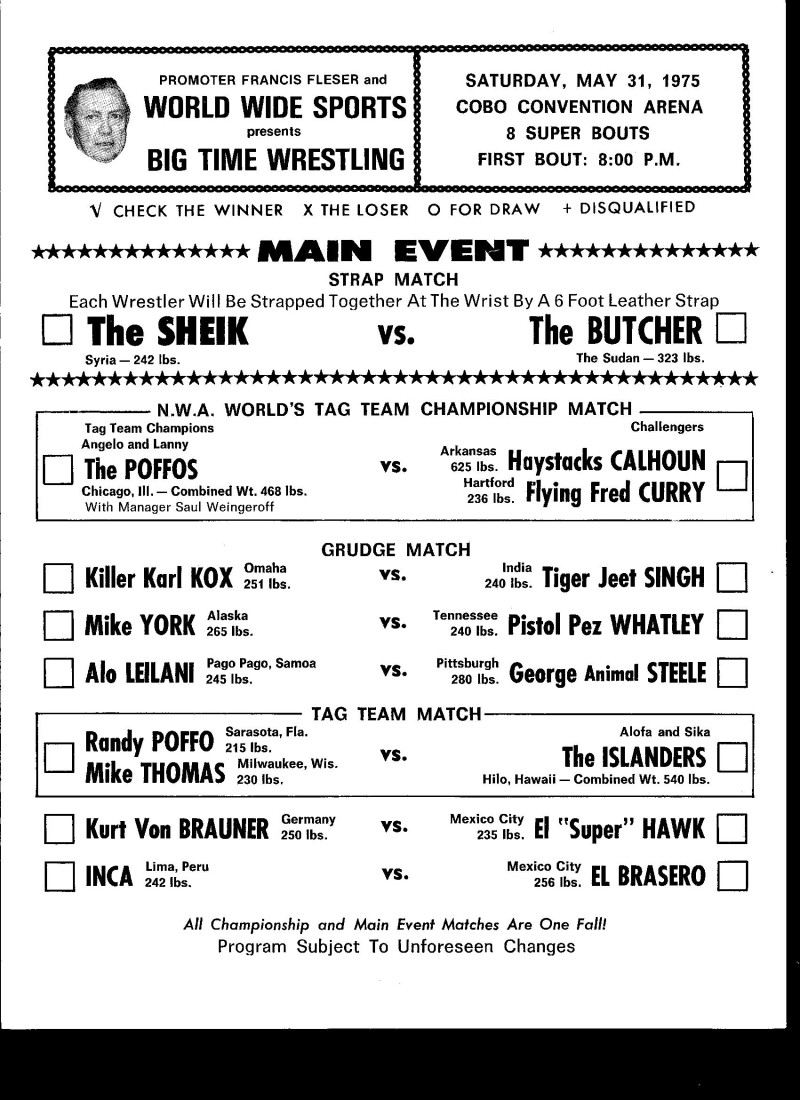 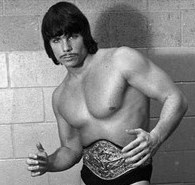 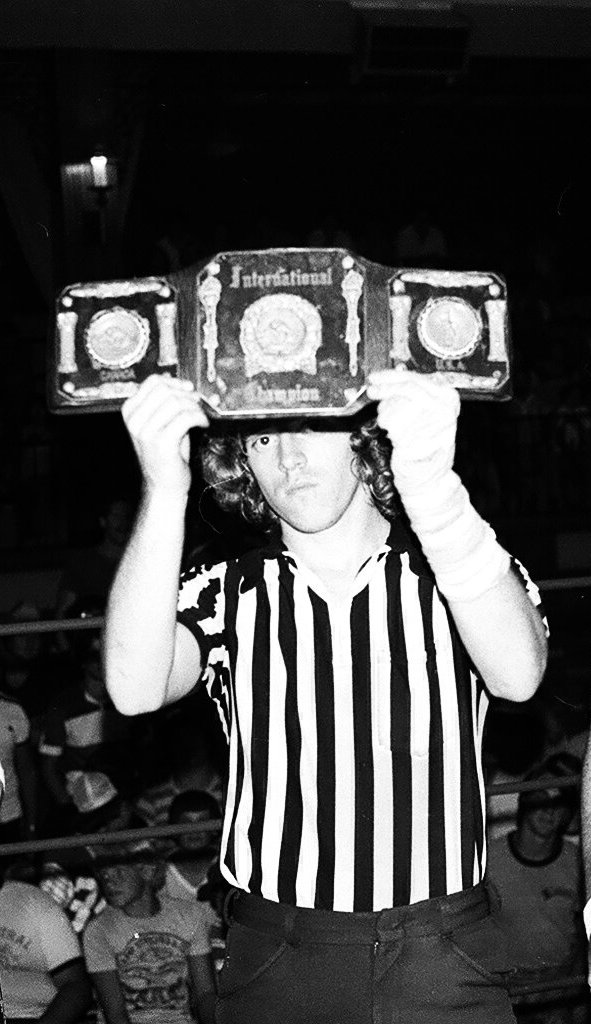 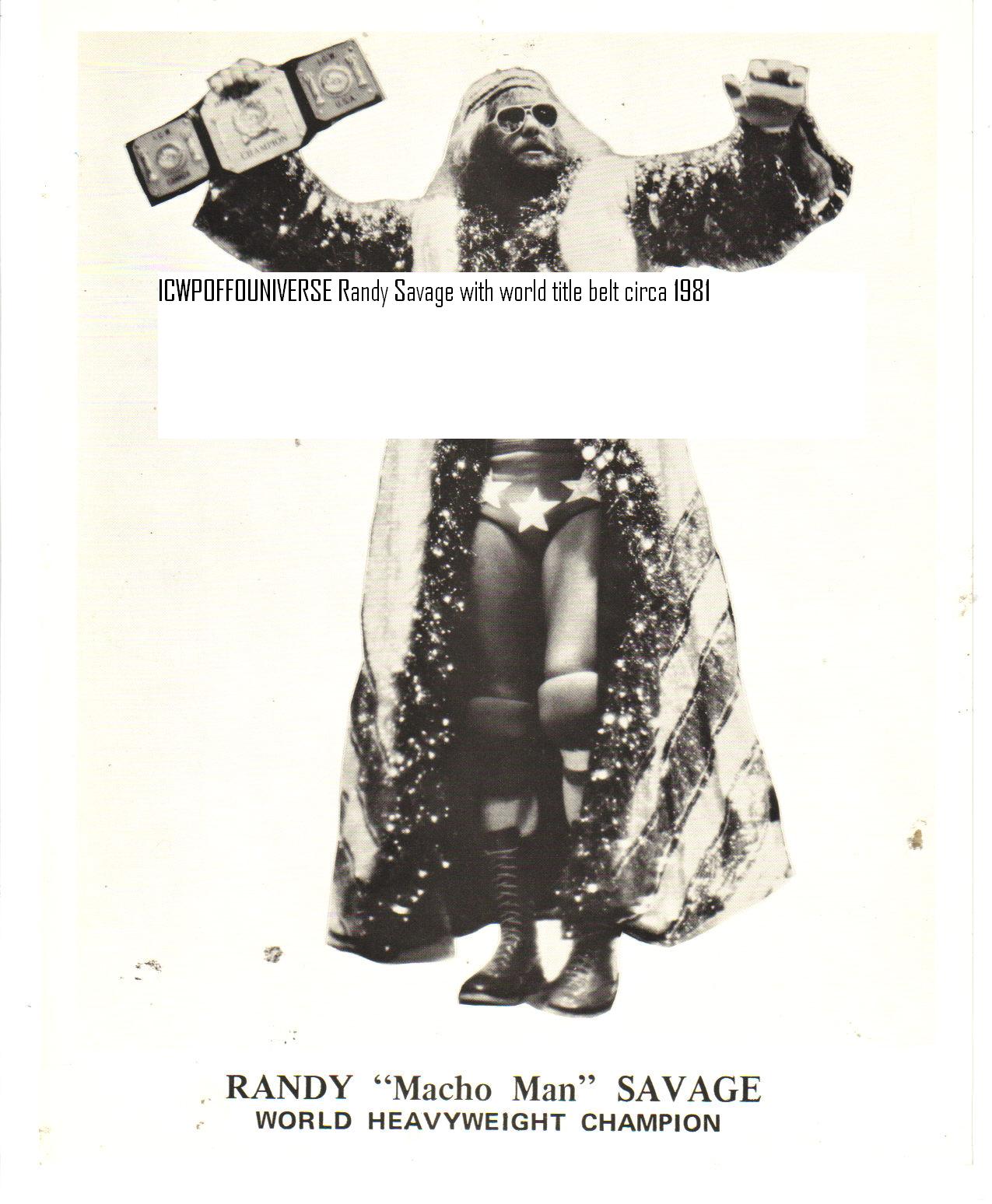 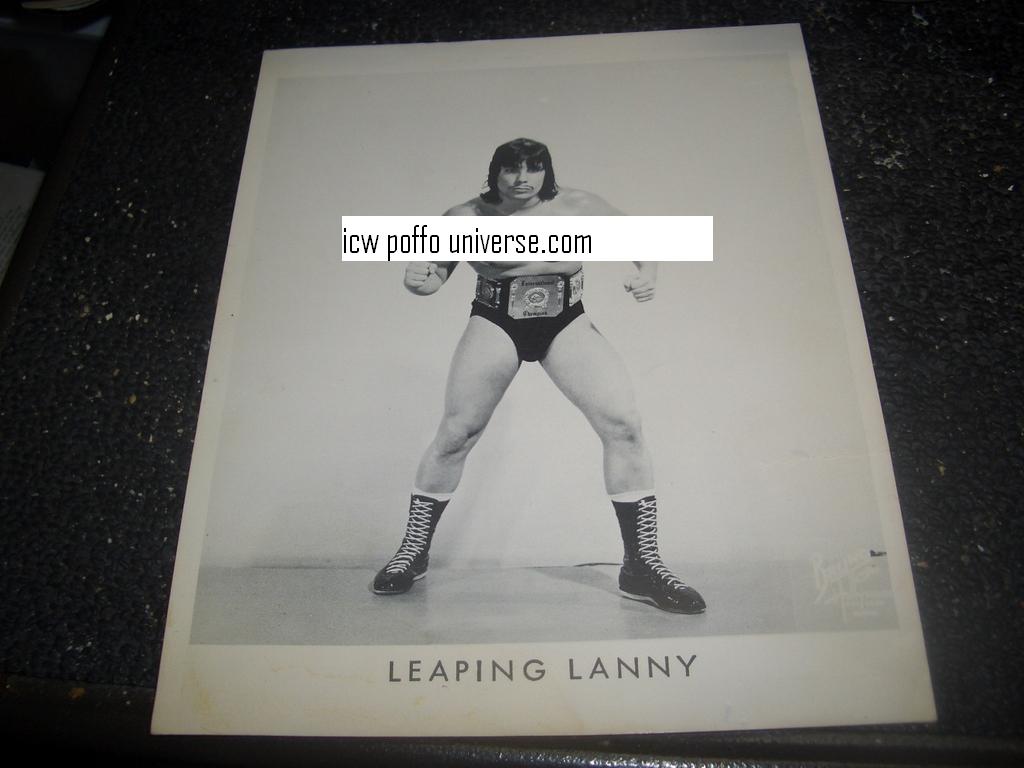 The ICW World title was the ultimate goal of every wrestler who stepped foot inside the ICW promotion. It was originally derived to have been captured by Lanny Poffo in a tournament in . Of course, we know this was a rouse by the promotion to give the group a more world-wide appearance. The tournament, in which Lanny upended Joe Banek in the finals, was to have occurred in May of 1978 on the tenth day of the month. By also dating the belt previous to the origin of the group in April of 1979, it also gave it character in that Lanny, of course, had been defending this title successfully since that date. So several things were achieved by falsifying the origin of the title lineage. Interesting side notes, Joe Banek was a wrestler who worked in the 1950’s, as did Angelo Poffo. Angelo also used Banek ‘s name constantly to fill out advertised cards early in the groups history 79-80-81  when he had an odd number of wrestlers advertised , and Banek was always “supposedly “ working the opening match.

The Poffo ‘s had worked during the summer of 78 in The Atlantic Grand Prix promotion run by Emile Dupree in Canada. Their was a belt which Lanny and Randy both held for this group called ‘The International title”. I’m fairly sure this is the exact belt itself that the group ended up using for their championship but that is just additional info.So essentially Randy and Lanny were both referred to as International Champion a lot of times during the early shows.

The ICW World title belt itself was very prestigious in appearance. It had symbols of the continents on its plates, plus was basically flat on the metal on its sides. The metal was a shiny gold on the item.  So to the fans this belt looked like the real McCoy.

According to the groups listing of title changes, Randy defeated Lanny on March 13 1979 in to be the second ICW Champion.This bout did not occur but was the promotions acknowledged transition of the belt.

Howver ,recent advertised matches discovered have revised the early ICW World title lineage. From the info derived it appears The Miser (Angelo Poffo) defeated Lanny Poffo to become the second ICW champion on June 3 1979 in . This was a mask versus the belt match up, with The Miser appearing as the title claimant on the June 10 1979 advertisement for that city. Evidently Lanny recaptured the title possibly on the June 10 1979 rematch ….then lost it to Randy sometime around August 1979.

To further confuse the issue Savage is listed as ICW champion in the Knoxville All Star advertisement for August 4 1979, but Lanny is listed in the ad for August 5 1979. Possibly the televised match where the switch occurred was on the Saturday August 4 on the ICW show.

In actuality on a televised show in mid 1979 Lanny dropped the title to Randy Savage. I believe the date of the televised event was August 5 1979. I have ads showing Lanny as champ between the March 13th date and the July 21st televised change. According to my sources, The Prophet interfered to help Randy win the bout. 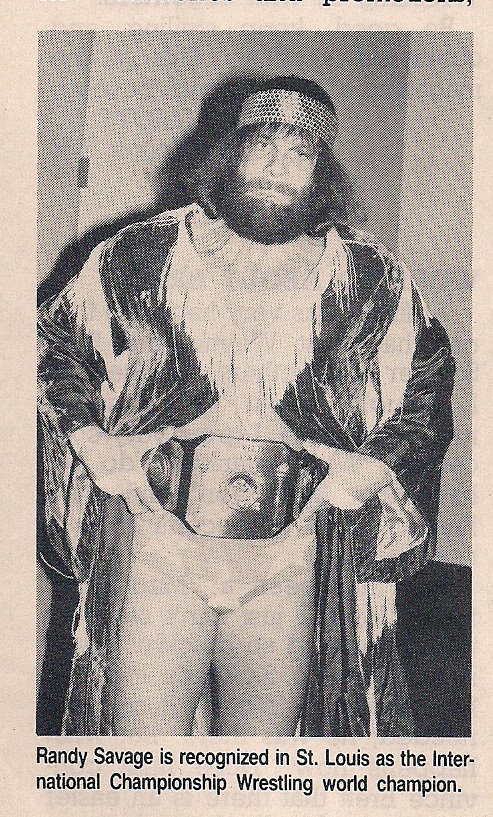 On televised shows the belt was referred to as both The International Heavyweight championship and the ICW World title up until mid to late 1980.

Randy held the title consecutively for 4 years 8 months and 13 days. No changes in this time frame.

Golden Boy Paul Christy pinned Randy Savage in on November 13 1983. I have this bout on video, the entire match. It was Bunny Love’s hair against Savage’s title with Christy prevailing. 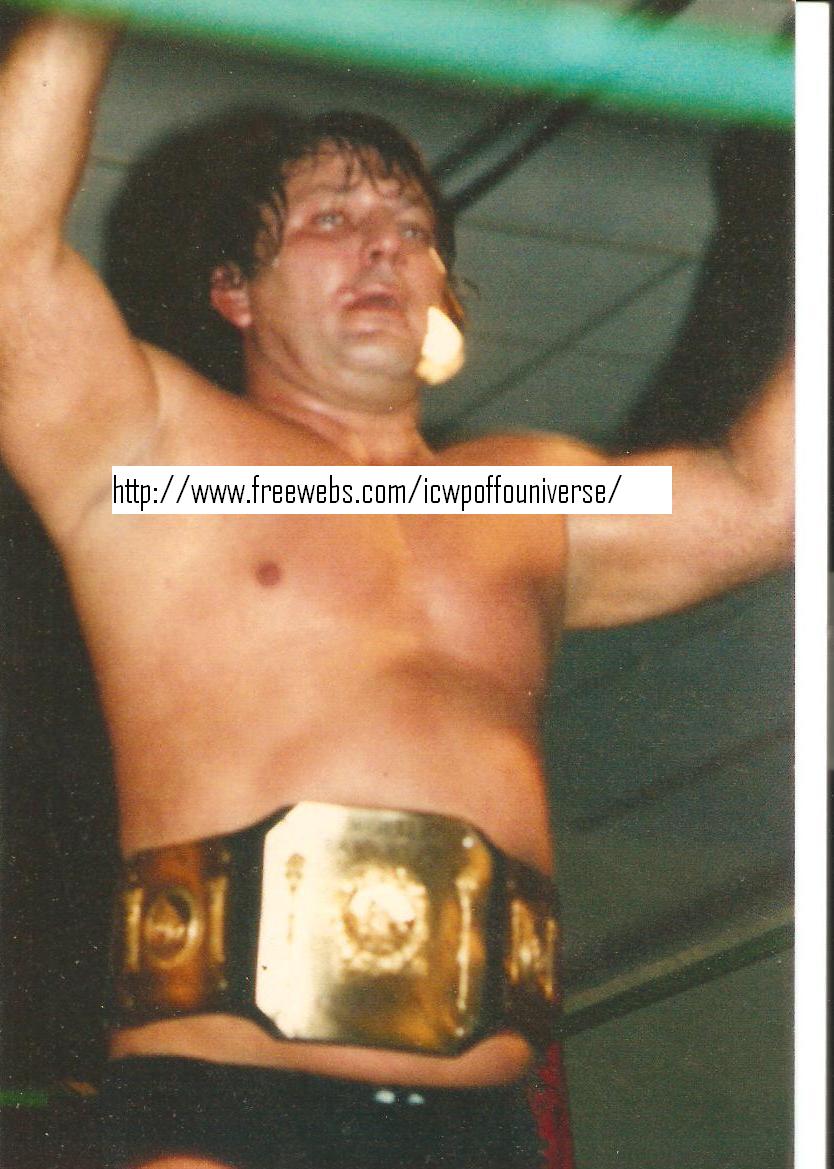 Paul Christy kept the title, defending throughout 1984 and part of 85. According to Paul he still has the ICW World title belt in his possession; contrary to what I had written here previously. I am a million percent positive I read a post on the old " kayfabememories" message board in 2002 written by Miss Bunny Love which stated Paul had returned it to Randy.... guess I mis-remembered as Rogers Clemons once famously said.

Notes of tournament: Randy Savage as ICW World Champion was given a bye until quarter finals. The four finalists were Savage, Pistol Pez Whatley , Bob Roop and The Best . The Best at this time was Bob Orton Jr. under the mask. In the semi finals Savage defeated Whatley and Roop pinned The Best. Other tournament highlights included Jim Pride upsetting Hustler Rip Rogers. Also Barry Orton defeated Ronnie Garvin with help from Izzy Slapowitz and Bob Orton Jr. As Orton distracted referee, Izzy injected a substance in Garvin’s arm which caused him to be rendered unconscious. Orton was disqualified from entire tournament , but wrestled in it as The Best . Also in another upset Big Boy Williams topped Professor Boris Malenko.

Bob Roop won the belt back from Orton on June 13 1981 in Woodlawn Illinois.

The Great Tio beat Bob Roop on ICW television about July of 1981. Roop absorbed a pile driver from The Destroyer ( I have video and can’t tell if it’s Orton or Savage ) which lead to the pin fall from the newcomer Tio Tio .Fairly sure this initiated the quicker departure of Roop to follow Orton down to the mid south promotion of Bill Watts. 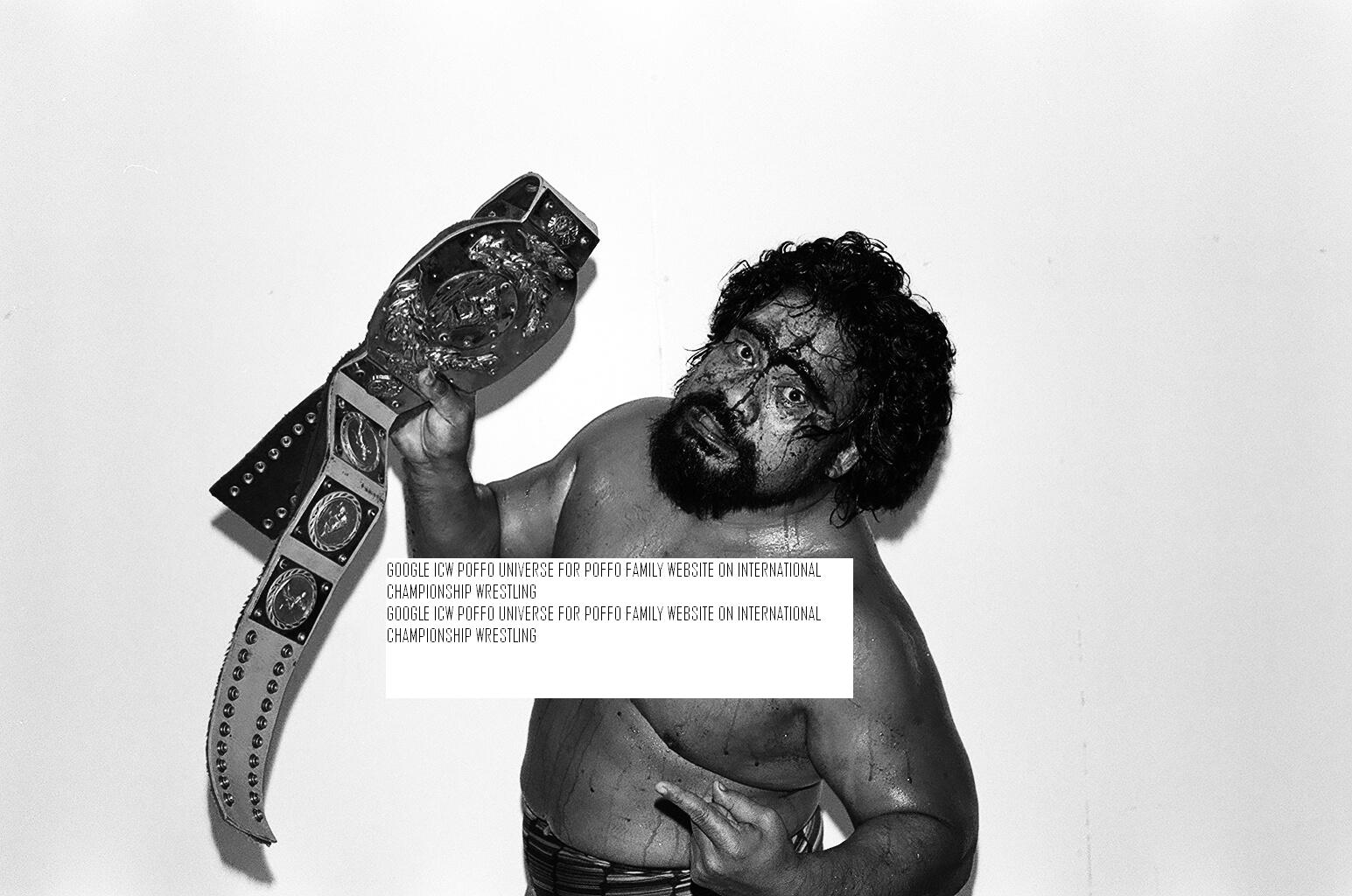 The Miser (Angelo Poffo under mask) defeated the Great Tio for the title on November 19 1981.This date is probably about 2 weeks off actual date; but is date presented by promotion.

Video of this match was just determined. It was originally supposed to be Ronnie Garvin facing The Great Tio in this shows bout; but for some reason Garvin is a no-show for the bout. The Miser takes his place…. As he has been the king of missing bouts at the end of most of the television shows. Garvin enters the TV studio about 10 minutes into the bout with a suitcase and cleans house hitting Tio over the head with the foreign object. The Miser covers and is crowned the TV champ after a three count. Garvin is subdued by Pez Whatley and Tio and is beaten up with a lead pipe and is out for several weeks due to this incident.

The Great Tio regained the belt from Unmasked Miser Angelo Poffo in on May 13 1982 .

Lanny Poffo was victorious over the Great Tio to win the title on May 20 1982 on television .

The title ceased to be defended in mid to late 1983, although the group still had a viable television show.

The heavyweight championship was not an original belt in the singles division when the promotion was developed.

I guess because Angelo Poffo had held the original NWA “United States Heavyweight “championship earlier in his career; this lineage to the title was developed. The Sheik Ed Farhat had a belt under the same name in his promotion in the 1970’s and early 80’s and his promotion was quickly dying in the , upper and Canadian towns. He came to do a tour with the Poffo’s in early 1982, and thus the belt was derived to be a part of the promotion’s chain of power. They never really told what belt was the most prestigious (other than the World title of course), but their were 3 secondary titles in the singles division during 1982 and 1983. The Sheik showed up at the television studio; he was stated to be the champion. In the first show he wiped out Bill Martin and bloodied him so bad they had to black it out of the screen. On the second show of the two show taping he again was on the scene. Gary Royal had challenged Randy Savage to a bout and was waiting in the ring for Randy to arrive. Randy’s fame music was already playing and the Sheik entered the television studio via the front office door. He went to the desk and messed with Tim Tyler and Edgar Wallace, and eventually went up into the ring. George Weingeroff came to the announcers’ podium and stated the Sheik had been banned from the studio. George went up to ringside and into the squared circle to confront the Sheik. The sheik hit him with a stick of wood, and then proceeded to thrash the promoter.

A lot of the matches promoted vying for the belt included Angelo Poffo, especially during the 1983 calendar year. I recall a feud with Paul Christy, Moose Cholak. 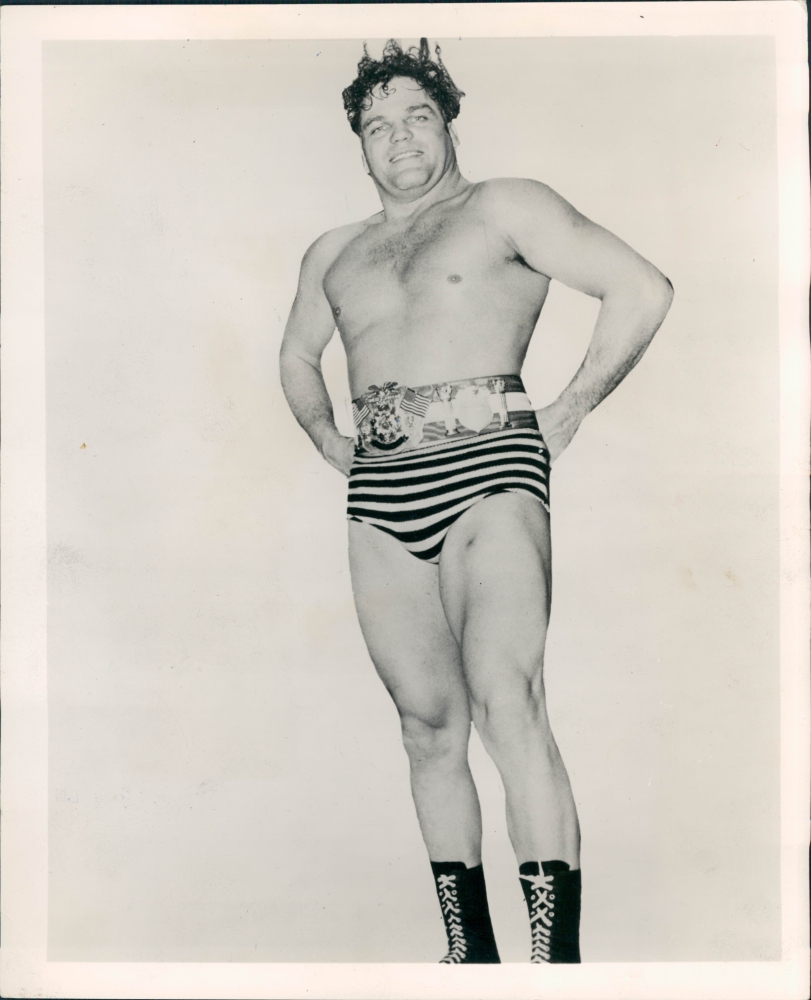 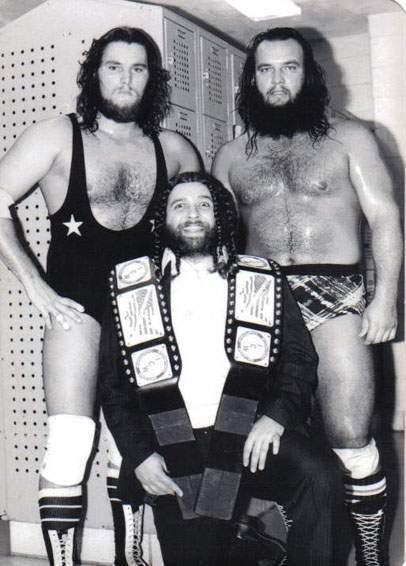 Leaping Lanny and George Weingeroff won a fictitious tournament which was to have occurred in on June 14 1979. According to the winners, the runner ups in the event were none other than the fabled . 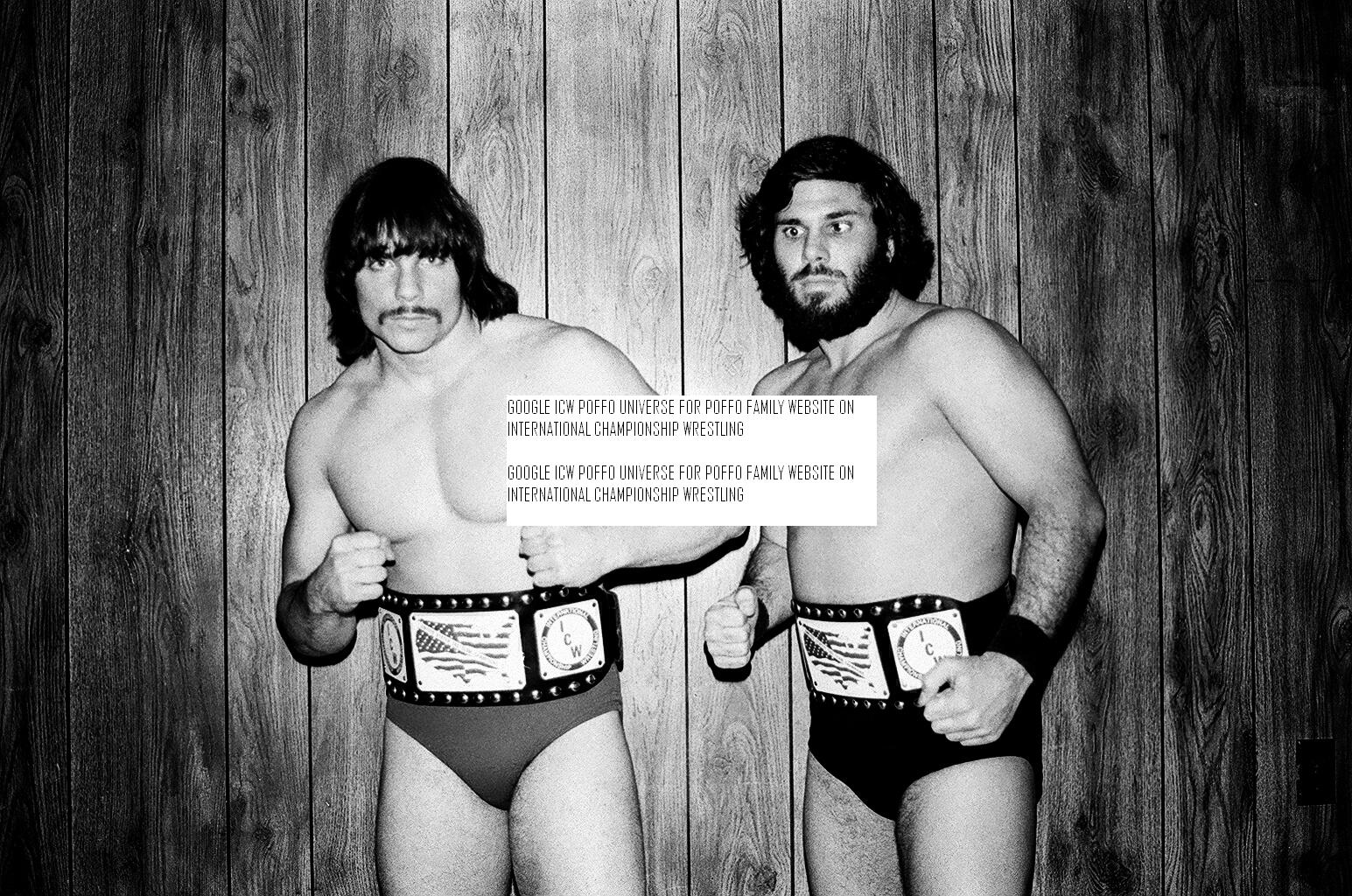 Doug Vines and Jeff Sword (The Devils Duo) managed by Izzy Slapowitz defeated Lanny and George at on April 25 1981. There is video footage of the event, and I was personally in attendance for this night. Izzy Slapowitz used a fireball in the bout, and Doug Vines loaded elbow pad also had some bearing on the outcome.

Lanny Poffo and George Weingeroff regained the titles in Owenton on June 15 1981. Izzy Slapowitz was not at ringside with his team for the bout, and all three members left the promotion shortly after this event.

The Convertible Blondes (Ricky Starr and Rip Rogers) pinned the champs in on. It was an extremely fast count by a new referee, who just happened to be Convertible blonde member Gary Royal with a black wig on. Lanny and George protested, and even removed the wig with a punch to the jaw of Gary Royal but the Blondes were on television for a short time with the belts. I have video of this event.

Lanny and George were awarded the title back after the ICW Board of directors determined an injustice occurred on the previous title change.

Titles are declared vacant due to controversy of the recent bouts involving the tag team titles.

A tournament was declared for on Tuesday January 5 1982 for the belts. Random partners were united which resulted in some odd unions. The team of Rip Rogers and Pistol Pez Whatley were victorious in the finals stopping the team of Ronnie Garvin and Chief Tapu. In one of Ronnie’s famous exposes shortly thereafter, he revealed Tapu was the son of Tio Tio (one of Garvin’s foes) and he had thrown the final match. Others who worked the tournament were: Ric Starr and Crusher Broomfield, Plowboy Pete and Gary Royal, Randy Savage, The Miser, Tony Peters and The Great Tio. Paid attendance listed as $1,704 by Crybaby Edwards. No footage of this night and reports are based on fans in the audience that evening. 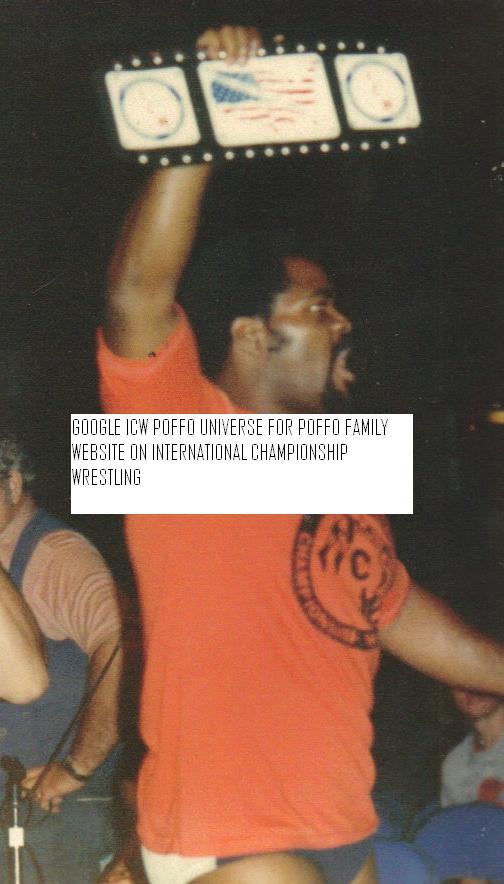 The promotion introduced new belts in 1982. Not sure the story as to why ; but Pez below displays one of the new belts he and Rip wore. 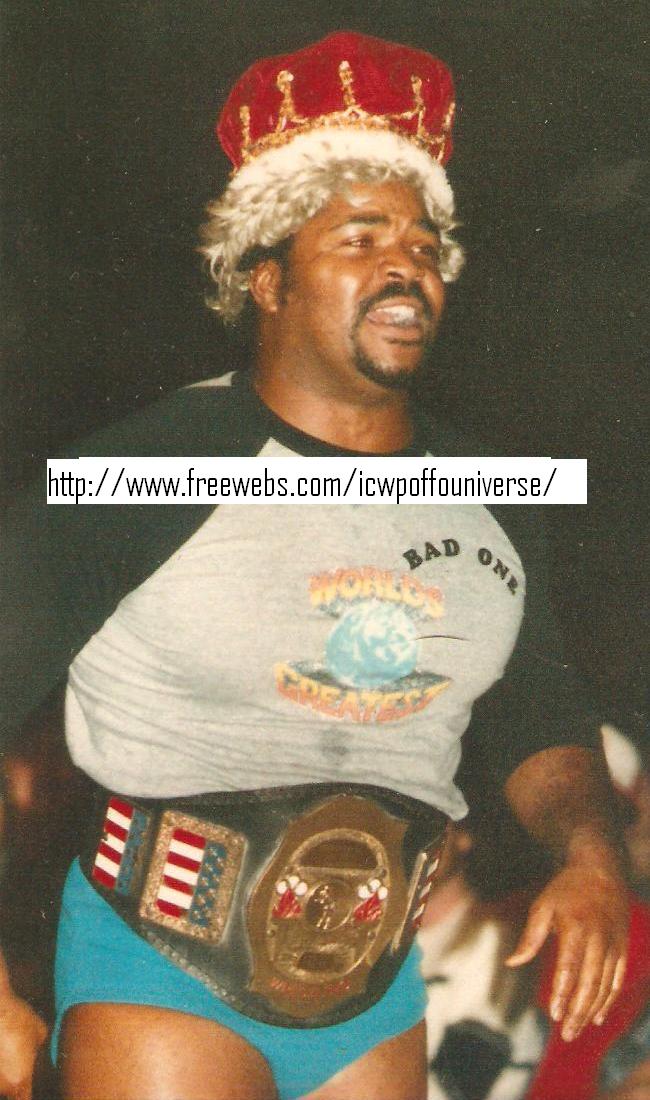 Lanny Poffo and Mike Doggendorf beat Rip Rogers and Pez Whatley in on March 2 1983. This complete match up is available for viewing.

Gypsy Joe and Tojo Yammamoto took the belts on .

Bart Batten and John Wilhoit won the titles from Gypsy Joe and Tojo Yammamoto in in 1983.

These were part of the All Star promotion from Knoxville and were incorporated into the ICW when the All Star group folded. If I recall correctly , Izzy Slapowitz indicated the belts came from Caulkins promotion in Mississippi . Here are title holders and dates :

ICW rookie of the year 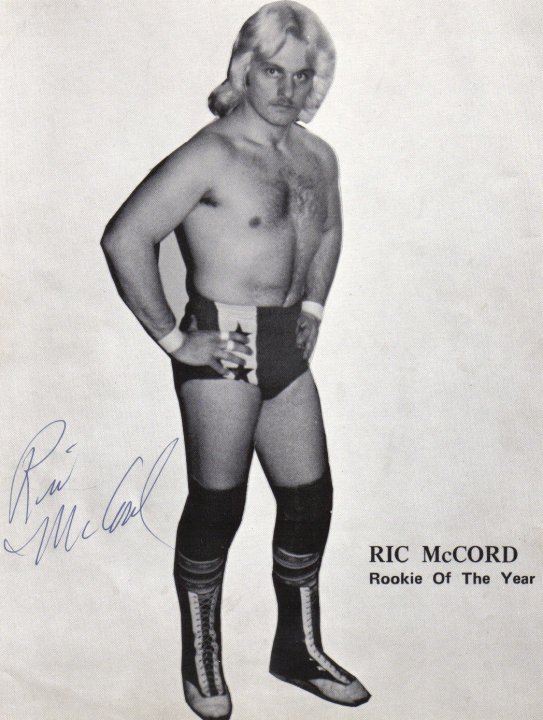